Our director, Jan Lalinsky, has had two significant events in the last six months. The birth of a daughter and now also the release of a new version of eWay-CRM 6.1, which he talks about in the following interview. Fortunately, joyful events fill him with a lot of energy, which he needed in last couple of weeks. After all, see what the release of the new version of eWay-CRM entails.

The new eWay-CRM 6.1 was only released at the end of October, so it may be too early for evaluation, but I'll ask. What were the first reactions to the release of the new version?

I was very pleased with how many people came to the event. We used to send clients an e-mail on the day the new version was released, and then we explained to them via social networks, e-mail or articles how the new version works and described the innovations. This time we decided to come with an official launch, where we kicked out the new version. And judging by the number of participants, I dare say that the interest was great.

Did this presentation of the new version work?

Yes, I want to continue with it. I want this to be an event that people will look forward to. A great inspiration for us can be Apple, who have perfected their events. And I think it worked up a level higher in Steve Jobs’ era.

You presented the news online in person. But that's probably not a problem for you as you are an experienced lecturer, is it? Do you feel better in front of the camera or in front of the audience?

I feel good in front of the camera and in front of the audience as well, but in both cases I used to be nervous at the beginning. Although it was not pleasant for me, I realized that it was necessary to overcome fear and go for it.

I like that you are not hiding as a good company leader and you are not afraid to have skin in the game.

That was a big dilemma about 2 years ago. Until then, I tried to stay behind the scene, but then one day I said to myself that as a company director I should stand up. Although there was some shyness at first. But somehow I managed to overcome it and we made our first videos.

There is still work to be done. Fortunately, I don't have the problem of watching myself or listening to my voice. On the contrary, I quite enjoy looking back, how I acted, how I stood, gestured or worked with my voice. I like to discuss with people how it affected them and what emotions it evoked. I don't know if it's normal. (laugh)

Some users, as in life, do not like changes. How can they make an easy transition to the new version? Does it help, for example, that they can ask us for new eWay-CRM functions?

Certainly. We don't want to be a company that doesn't listen to the customers. On the contrary. We want to open up and talk to people. Of course, it is no longer possible to satisfy everyone in this number of users, but we are definitely trying to let the voice of the people speak. That's why we always say write your ideas and vote for the ideas of others. We're looking at it.

What is your development vision? Where, in addition to users’ feedback, do you get inspiration?

The main impulses come from me. I try to keep my eyes open, use modern tools, especially from Microsoft, and follow trends. And sometimes I come up with completely new ideas. Typically, they come across my mind when I’m out of work when I let my thoughts flow and my brain goes into that flow state. All experiences, stimuli and visions are then materialized in the idea I have almost before my eyes.

In such a situation, I always tell my wife not to talk to me, 'I have a flow', and she already knows she has to leave me alone for half an hour, and she tells the kids 'don't disturb Dad, he has a flow' (laugh). I'll take a pen and paper, and start creating.

Give us some example of your flow.

Now it is about the integration with Office 365. We've always been a CRM that is integrated with Outlook, but Microsoft has done a huge amount of work on Office 365 in recent years. In fact, they now call it Microsoft 365.

They also tried it with CRM but stopped it after about a year. And here I think that eWay-CRM can help clients. We have an amazing tool, and if we connect it well to applications such as web Outlook, Teams, OneDrive, it will be even greater.

And then when we start designing such a big thing, we always go through the ideas and try to fit as many client suggestions into the design as possible. 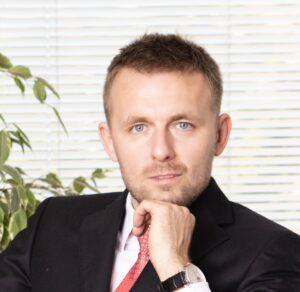 And when do you say 'enough, we will release a new version, we will not develop other new functions, we will leave them for the next version'?

We always try to sort the functions according to their importance because we could develop orever. That's why at a certain stage I always have to come and say, so now a new version will come out.

Usually, it comes when the main feature pack is in a state where we are happy with it. Yes, there are usually a few ideas left out but most of them are things that are of minor importance to most of us, or their price / performance ratio doesn't make sense.

If a user stubbornly refuses to update software, how long do you think you can work effectively without the update?

There are still a lot of companies in the world for who a pen and paper are enough. We also have clients who are still using version 5.1, which is five versions behind. And that's enough for them. Not everybody finds new things interesting enough to do the update.

We do not push our clients into anything. But if the client has a problem or wants to implement some of their vision into eWay-CRM, we will explain to them that thanks to the update, which is for free, the new version can solve the same thing many times faster than the old one.

The eWay-CRM Web application was also introduced together with the launch of eWay-CRM 6.0. It was at the beginning of the first lockdown that no one expected. Today, you could probably say that the eWay-CRM web application probably couldn't have come in a better time, could it?

Most of our clients work with Outlook, so the web client is not a main pillar of our client database. But it suited a lot of people. Whether those who had to start working on a home PC from day to day, or those who had wanted to work on a Mac for a long time. We saw it since so many customers wanted to download the web application on their servers. Also we got a lot of feedback on it.

Sometimes I use a web client myself when I keep my laptop in the office.

I use it at home too. I intentionally did not install the desktop Outlook at home, and I use the e-mail client, which is the basic menu of Windows, to have a user experience in such a situation. I must say that this experience helped me identify a lot of missing features. Now we are trying to add them to the web app soon as possible. And much more will follow.

Have you been working more from home lately? Whether because of the lockdown or babysitting?

After my daughter was born this spring, of course, I was at home with my wife and son. Otherwise, I have to admit I don’t like the home office so much. That is known in the company. However, I respect others, especially now that we need to protect ourselves. It is essential that cooperation, and especially communication, works.

Judging by the interest in introducing the new version 6.1, it works. Finally, can you describe what’s like before and after the release?

I like the time before the release. It is always incredibly hectic, creative, stressful, exhausting, but at the same time beautiful. Before the release, we have a finished product that we've been working on for a long time, but we can't just show it to anyone, even if we'd love to. No one would know what is new in it and how it is used.

So, we have to pack the new version in a beautiful package. Write articles, documentation, shoot videos, and so on. And this time we also had to prepare the event. To date, we have updated 25% of clients, which is a phenomenal success in such a short time. Usually, we have such a number updated after a month. As soon as the hectic period after the release is over, we smoothly move into the creative phase of preparing a new version. Now, we are already at the beginning of the preparation of eWay-CRM 6.2.