It is no secret that programming is a fulfilling and well-paid profession. Even so, there is a shortage of top developers. Therefore, talented candidates always have opportunities. The most hard-working can succeed in a matter of months, with developer Adam from eWay-CRM as proof of that. In the following interview, you will learn about coding bootcamp and how it helped him learn to code quickly, and what helps him overcome and strengthen his will, without which the path to success is much more complicated.

Could you describe your journey to eWay-CRM?

After completing 3 months of coding bootcamp last spring, eWay-CRM hired me for the new position of React developer. I had worked quite intensively with JavaScript before the bootcamp, so I already had a good foundation to become a professional developer.

What is it like to be the youngest of the entire development team?

There are many upsides because I have someone to learn from. Our developers are really good.

How did you learn to code in JavaScript?

As a process consultant, I worked with a tool in which I set up a workflow for corporate customers. For example, order and invoice confirmation, and so on. In addition to setting the workflow in process diagrams, I also programmed some other functionalities in JavaScript.

I assume that you gained more skills by completing the coding bootcamp. Could you tell us more about it?

It is a course for full-stack developers, which is attended just like in school. However, I signed up at the time the Covid epidemic began, so most of the teaching took place online. Among the students were a lot of newcomers who wanted to change professions and become developers. Some learned to program well, some worse. It depends on the effort invested and the talent. Only those who gave it the most really found a job right away.

Would you recommend it to other beginning developers?

Everyone who wants to learn programming has two options. Be patient and self-taught, or choose the faster way of an intensive course. I really appreciate that the course forced me to work diligently to learn how to program. The mentors help the course participants a lot, but it's still up to everyone to learn it on their own.

What are your job duties in eWay-CRM?

I am currently working on the eWay-CRM Web, but I am also responsible for the Administration Center. I think we did a lot of work there. I really enjoy working on it with our CEO. Jan is open to new ideas. Usually he comes up with a new idea and then I like just to improve it. For example, we've been able to simplify user rights, and yet it is more user-friendly while users still have the same options.

As you mentioned, in eWay-CRM you develop in React. What convinced you of this choice?

More complex web applications, such as eWay-CRM Web or the new Administration Center, are currently developed in large frameworks that are built on JavaScript. There are several such frameworks, such as Angular from Google or React from Facebook.

React is one of the most popular frameworks. It is much faster to develop. For example, I create individual elements, such as a button or a picture, once, and then I just arrange it like a lego, and everything works. It's much easier thanks to reusing code I've already written. 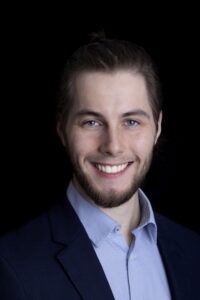 Let me change the topic from work to rest. Which is ice baths and exercise for you. Do you feel that it helps you to concentrate more at work?

Ice baths are more of a fun meditation and a way of overcoming oneself for me. It is a pretty uncomfortable feeling, but it brings me into the present a lot. I don't know if it has any effect directly on work performance, but it definitely lifts me up as well as exercise. That's what I feel now that I have started going to the gym again.

How did you even get to ice baths? It's a big trend now, but as far as I know, you've gotten to it differently.

You are right, the great promoter of ice baths Wim Hof ​​is to blame.t was part of my personal development. First I started with cold showers to train my will and be able to overcome myself. Later, when I discovered Wim Hof ​​and his methods, I tried ice baths and it was great. I liked being in nature, completely at ease. Along with proper breathing, it has healing effects.

I also know that you like to travel, which is not such an unusual hobby. But not everyone travels at the moment. What was your last trip? Have you enjoyed it even with the anti-epidemic restrictions?

It depends on what you expect from travel. The last time I went to Madeira, which is more about traveling in nature. We rented a car and toured the island. We were also in dangerous looking places where we probably shouldn't have gone. For example, we went on a path that looked medieval. A cliff below us, a cliff above us. I was afraid it would fall on us.

But it was definitely worth it. There were no tourists in Madeira, which is probably the biggest advantage of current travel. Thanks to that, we were completely alone in a lot of beautiful places.